Even on their honeymoon, Jennifer Lopez and Ben Affleck aren’t completely disconnected from their phones. Page Six and the Daily Mail report the couple has flown back over to Europe following their Georgia wedding ceremony this past weekend—and Affleck was photographed showing Lopez wedding pics during a dinner in Tremezzo, Italy. One photo appeared to be the shot below that ran in Lopez’s On the JLo newsletter. 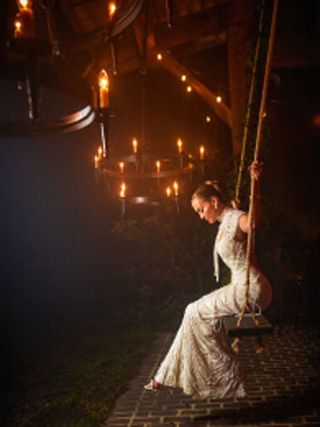 Lopez and Affleck were also photographed on a boat in Lake Como, off the coast of Tremezzo. Lopez wore a white long-sleeve dress, kissing her husband in one photo that Page Six ran.

Lopez donned the same dress to dinner, during which Affleck showed her wedding pics. The couple ate at Grand Hotel Tremezzo in video and photos that the Daily Mail ran. The outlet wrote, “The two ate alone and shared several smooches as they sat side by side throughout the dinner. They could be seen looking at what appeared to be photos from their wedding on Ben’s phone, which he held up several times to share with his beaming bride.”

Lopez hasn’t shared full wedding details yet from their three-day ceremony in Georgia. But in her newsletter, which debuted photos of her three Ralph Lauren wedding gowns from the festivities, Lopez promised that more information would come soon. “The dresses were dreamy… thank you Ralph Lauren 🤍,” she wrote. “I will be sharing a few more pics and delicious details on our big day coming very soon On The JLo…”

Lopez and Affleck initially got married last month in Las Vegas. They went on a honeymoon-esque family trip to Paris following the surprise nuptials. Photos released of their Italy vacation so far indicate the two are on their own enjoying a couple’s trip.

Alyssa Bailey is the senior news and strategy editor at ELLE.com, where she oversees coverage of celebrities and royals (particularly Meghan Markle and Kate Middleton). She previously held positions at InStyle and Cosmopolitan. When she’s not working, she loves running around Central Park, making people take #ootd pics of her, and exploring New York City.

Sri Lanka May 09 violence: Report to be submitted to parliament soon