We’re abortion providers, and we’re extremely concerned about the future of the family in the United States.

Perhaps that sounds odd. For decades upon decades, Republican politicians, social conservatives, the religious right, and organizations like Focus on the Family, Family Research Council, and others of their ilk have sought to position themselves as the true defenders of the American family—and us among the family’s most fearsome enemies.

But among the many things on our minds in the wake of the Supreme Court ruling that overturned Roe v. Wade—and will end or drastically curtail access to legal abortion across vast swaths of the U.S.—family looms large.

It’s not just that a critical decision about building one’s own family—regarding whether and when to have children—is in imminent peril for millions of people. It’s not just the damage this will cause as states across the nation absorb the impact of tens of thousands more government-mandated pregnancies every year; as the United States’ abominable record on maternal health outcomes continues to worsen; as postnatal care, child care, education, and other vital support systems are pushed further past their breaking points; and as all of this further exacerbates the harms and inequities endured by people of color, immigrants, the economically disadvantaged, and other marginalized people and communities.

What concerns us every bit as deeply is the degree of governmental control over other decisions essential to defining and shaping our families that this ruling seems likely to enable and empower.

The majority opinion written by Justice Samuel Alito takes pains to state that the decision to overturn decades of precedent affirming abortion rights holds no implications for other rights similarly safeguarded by Supreme Court precedent. But can anyone, Justice Alito included, truly believe that? In his concurring opinion, Justice Clarence Thomas explicitly called for the court to revisit the precedents protecting birth control, same-sex relationships, and gay marriage. And over the past month, we’ve already seen renewed attacks on LGBTQIA+ rights and credible threats to go after contraception and the very right to privacy in our own bedrooms and homes. 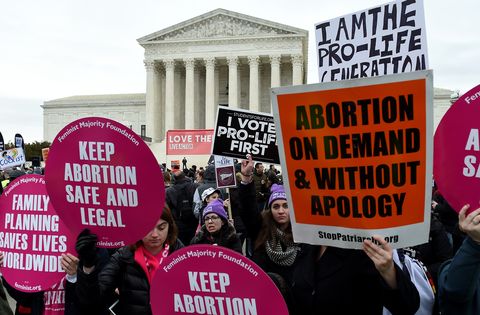 Pro-abortion and anti-abortion activists outside the U.S. Supreme Court during the 47th annual March for Life on Jan. 24, 2020.

There is massive overlap among the politicians, activist organizations, and other self-anointed defenders of the family who are attacking abortion rights and those who are attacking everything from gay marriage to protections for LGBTQIA+ kids, from critical support systems for struggling families to the teaching of uncomfortable truths about America’s history in schools.

Their definition of family is extremely narrow and—according to an abundance of research and polling demonstrating overwhelming support for abortion rights, marriage equality, nondiscrimination protections for LGBTQIA+ people, and more—wildly out of step with what many people experience in their daily lives, see among their own communities, and want for themselves.

What this persistent minority of right-wing culture warriors has been seeking for decades is the power to control our decisions about how the rest of us define our own families—whom we can marry, whether or when we expand our families, how we raise and educate our children—and now they’re going so far as to criminalize many of the decisions people might want to make in doing so.

“We are parents who have built our families on a foundation of love, taking different paths to build our own version of the ‘American family.’”

Looking at the current political landscape, there’s a part of us that wonders what these people would make of the way we have defined and shaped our own families.

We are parents who have built our families on a foundation of love, taking different paths to build our own version of the “American family.” Among the three of us, we have 10 children, three grandchildren, and multiple generations living in our homes. One of us struggled with infertility, one of us had an abortion, one of us has never been pregnant. One of us built our family through adoption. One of us has a blended family formed by both biological children and children by marriage. One of us immigrated to the U.S. from South America to build a family in a country where her children would have ample opportunities—and, she had hoped, greater protections for their fundamental human rights.

We represent the varied and normal reproductive lives of people all across the USA. Our families are American families. And we are proud of them and of the strong values at their core.

Even so, we also firmly believe that what anyone else thinks of our families shouldn’t matter, and certainly shouldn’t form the basis for laws and policies restricting our ability to define and guide our families for ourselves.

As abortion providers, we play a critical role in enabling people to build their families as they choose, whenever they choose to do so.

As Americans, we strongly reject the authoritarian, anti-democratic, anti-Constitutional, and, yes, anti-family tendencies that animate the right wing’s efforts to seize control of the decisions we each must make in building and shaping our families as we see fit.