South Korean pop act LE SSERAFIM’s score in the Korean reality show Music Bank, which led to their victory over artist Lim Young Woong, is currently being investigated by the police if it was manipulated. 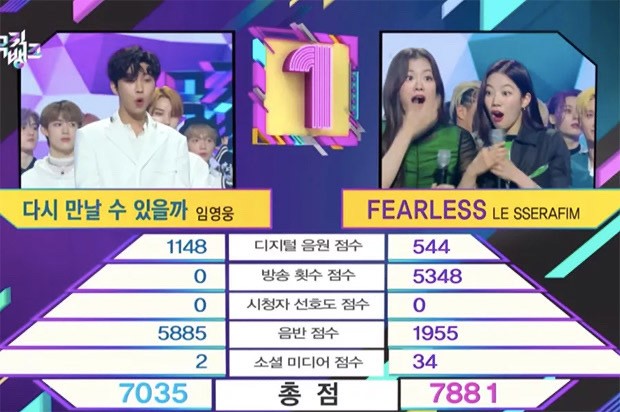 Earlier this month, the music reality show sparked controversy when the show gave Lim Young Woong a broadcast score of 0 points on its May 13 episode. The candidates for first place were Lim Young Woong’s “If We Ever Meet Again” and LE SSERAFIM’s “FEARLESS.” “If We Ever Meet Again” was in the lead in terms of digital performance and album sales, but the latter eventually won due to the big difference in their broadcast scores.

As noted by Soompi, KBS’ Music Bank rankings are determined 60 percent by digital scores, 20 percent by broadcast scores, 10 percent by viewer panel surveys, 5 percent by physical album sales, and 5 percent by social media scores, Lim Young Woong’s fan club demanded that KBS explain how a song that was overwhelmingly in the lead based on digital scores could fall to second place due solely to its broadcast score. Initially, “Music Bank” responded to the complaints by explaining that “If We Ever Meet Again” received a broadcast score of 0 points because it was not played on any KBS TV programs, radio programs, or digital content during the tracking week of May 2 to 8.

Since the scoring controversy around scores of Lim Young Woong and LE SSERAFIM on Music Bank kept on rising, an official petition finally emerged. On May 29, the police confirmed that the Yeongdeungpo Police Station in Seoul had received the complaint and had begun investigating the case. “As the allegations have not yet been confirmed, we currently plan to investigate by speaking to the complainants and more,” stated the police. “If the allegations of manipulation are found to be true, we will switch to a full-scale investigation.”

Also Read: Steven Spielberg had introduced Aamir Khan to Tom Hanks as ‘James Cameron of India’; Tom revealed that he has seen 3 Idiots as many as 3 times!

Startups and VCs are increasingly embracing the federal government. Here’s why