For further evidence that every new mom’s must-have is not a Snoo but, in fact, a slightly wrinkled but Zoom-appropriate button-down, we turn to Exhibit A, in which Rihanna stepped out wearing one three months post-baby, strolling alongside her partner, A$AP Rocky. During an Aug. 11 date night at Emilio’s Ballato in New York City, the singer wore a leggy little black dress, tie-up black heels, and an over-sized Raf Simons white button-down. 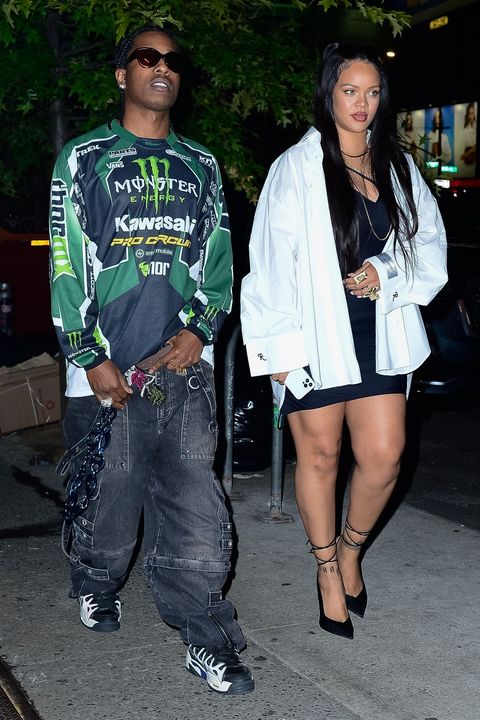 The new-mom chic look comes as the couple drops subtle hints that their embrace of public status will not extend to their newborn—at least until he’s old enough to choose when and where he’d like to be photographed. A source told Entertainment Tonight earlier this month that welcoming a son has changed Rihanna and Rocky’s stance on fame, which is why they’ve yet to share the baby’s name or any images since the birth.

“They’re keeping things low-key so they can enjoy their little family,” the source said. “Privacy has become increasingly important to the couple. When it was just the two of them, they’d go out all hours of the day and night and interact with fans. Now, with the baby, they’re a little more protective.”

The family is also facing increased attention apart from their new status as parents. In April, Rocky was arrested at LAX Airport in connection to a November 2021 shooting; he was released on bail but, as reported by Rolling Stone, is to be sued for “assault, battery and emotional distress” by artist and former best friend A$AP Relli over the alleged shooting. At the time of the LAX arrest, a source told Entertainment Tonight that Rihanna, still pregnant at the time, was blindsided. “Rihanna made a point to navigate the public side of her pregnancy on her own terms and now suddenly things seem out of her control,” the source said.

Rihanna is currently attempting to keep home and work low-key, but, as an ET source said, she plans to announce new projects when the time is right. “She’s one of the hardest working people out there, and she can definitely have it all,” the source said. “[She’ll] be a hands-on mom and have an impressive career.” Just don’t expect any lullabies on R9: “My fans would kill me if they waited this long for a lullaby,” the artist teased earlier this year.

Lauren Puckett-Pope is an associate editor at ELLE, where she covers news and culture.