New Delhi: The University Grants Commission is working on a proposal to integrate the engineering and medical entrances into the Common University Entrance Test-Undergraduate (CUET-UG).

UGC chairperson M Jagadesh Kumar told the media agency that as per the proposal, instead of appearing for the four subjects — mathematics, physics, chemistry, biology — in three entrance exams, students can take the exam once and be eligible for and explore different fields of study. The higher education regulator is working out a committee to deliberate with different stakeholders to reach a consensus. 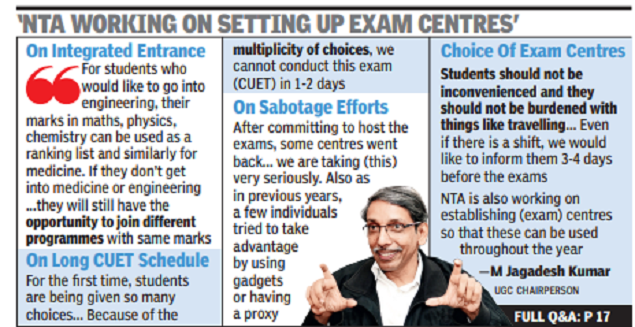 The objective of the proposal, Kumar emphasised, is that students should not undergo the stress of multiple examinations while they’re being tested in the same set of subjects.

“Typically, what are the programmes that are available? Some students may like to go into medicine or engineering. If they don’t get into either, many will in the general education. So is it possible to have only one CUET for all disciplines? The students who would like to go into engineering their marks in mathematics, physics, chemistry can be used as a ranking list and similarly for medicine. If they don’t get into medicine or engineering, under CUET they will still have the opportunity to join different programmes using the same marks of either mathematics, physics, chemistry, biology and so on. So therefore, by writing once, in these four subjects, students can try for different opportunities.”

The commission is seeing the move from the point of simplifying the logistics for the aspirants as well as the National Testing Agency (NTA).

“The other aspect is the logistics of arranging the computing facilities in so many centres. In some cases, as you have seen in CUET-UG, students are not given their first preference so they have to travel a slightly longer distance instead of writing in their own city. If you minimise the number of tests, then there is a possibility that from a logistics point of view for NTA, it will become much easier. And also for question papers, we have to do separate sets for JEE, NEET and CUET. Now we can have only one set of question papers for all these subjects,” said Kumar.

UGC is looking at building a consensus via deliberations among the stakeholders for the “single examination” so that candidates can be given the opportunity to write it twice a year. “The first one can happen after the Board exams and another one in, say, December,” added Kumar.

On bringing the pen-paper NEET-UG under its fold, Kumar said: “The future is computer-based multi choice question-type tests because OMR-based tests still have some challenges in terms of the accuracy of the evaluation.”